Everybody in St. Paul’s would like to congratulate Kayleigh Murray (4th Class) on becoming the European Gymnastics champion today! 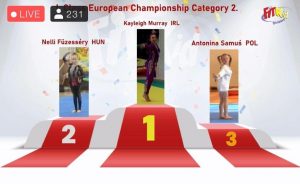 Today, Sunday 31st October, Kayleigh competed online in the Fit Kid 1st Class European Open Cup and European Championship.  The routine was professionally recorded just over a week ago.  The championship could not take place live because of COVID, but the gymnasts competed exactly as they would in person, only being allowed one take for their routine.

The competition was televised this morning, showing each routine before judging and the awards ceremony later in the day.

Watching the routine, there is no doubt as to why Kayleigh was crowned champion.  Her incredible routine looks so flawless and polished, there’s no question how hard Kayleigh has worked over the past few months.  We are so proud of your achievements Kayleigh! Well done!