Exploring The Power Of The Pulley in Room 28! Science and Forces Lesson in Mr. Conlan’s 5th Class

Last week In Mr. Conlan’s 5th Class we learned about Forces! We learned how to measure Force using a spring balance and we found out that Force is measured in Newtons (named after Isaac Newton!).

We also learned that simple machines can make our lives easier by reducing or redirecting the Force needed to do a task.  We examined how pulleys worked and the results were astounding!

First, we weighed our water bottle and found that it weighed 600g.  Using a spring balance, we recorded a force of 6 Newtons to lift the bottle from the ground.  Now to see if our pulleys could help us reduce the force needed to lift the bottle…

Our first experiment was using a Single Fixed Pulley.

The Single Fixed Pulley didn’t help us at all! We found that we still needed a force of 6 Newtons to lift the bottle.

Next we tried a Single Moveable Pulley.

Now we started to see results!  We found that we now only needed 3 Newtons of Force to lift the bottle.  This means we were using half the effort or 300g of ‘pull’ to lift the 600g bottle! 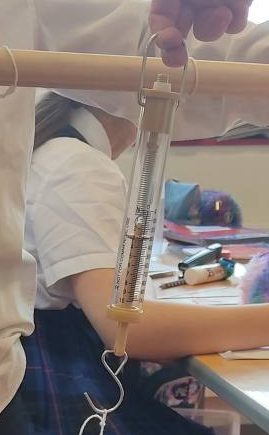 If one pulley worked so well, what could we do with two?!  Next, we tried a Combination Pulley which used two pulleys working together.

The Combination Pulley reduced the Force needed to lift the bottle to 2 Newtons (or 200g)!  We also noticed that we now had to pull the string a lot further to move the bottle a short distance.  When the children performed the experiments with lots of different bottles, they noticed a few patterns.  The Single Moveable Pulley always reduced the Force needed by half and the Combination Pulley reduced it by two thirds, no matter how heavy the bottle was to begin with. 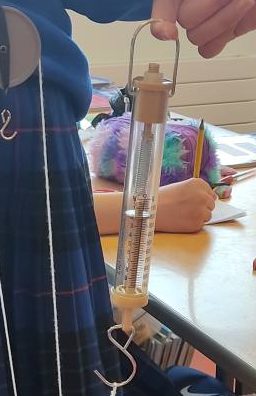 Finally, we pushed it as far as we could.  We used a system called a Block and Tackle to see how four pulleys working together could reduce the amount of work we needed to do to lift the bottle.

We now have two fixed pulleys and two moveable pulleys working together.  You can see from the video clip that we need to pull the string a lot further to move the bottle but it felt light as a feather!  We were only using 1.5 Newtons of Force to lift the bottle.  That means we were applying 150 g of ‘pull’ to lift a 600g bottle of water!

While these experiments were a bit tricky to set up, they were great fun and gave us a really clear insight into how a simple machine like a pulley can make our lives easier by reducing the Force needed to perform a task.